As beautiful as it is, your ketubah, according to Jewish Law is legally meaningless without two very important signatures. Yes, the witnesses may be the most important part of your wedding, and choosing them can be stressful.

After all, it’s an honor to be selected as a witness, not just because it’s extremely important for legitimizing the marriage, but also as it is proof a couple truly loves and admires you. Your signature becomes another part of the ketubah to be treasured, and connects you to the married couple.

The Role of the Witness

For a ketubah to be binding, it only needs the signatures of two witnesses. The rabbi and couple-to-be technically don’t have to sign it for it to be considered legally valid. The witnesses’ signatures attest to the fact that the wedding has occurred.

For this reason, it is traditionally insisted upon that the witnesses be male, observant Jews, and not related to each other or the married couple. There are different schools of thought about this, however, which is why in Reform Judaism the witnesses can be a person of any gender, over the age of b’nei mitzvah (13 and older) of the Jewish faith, but some rabbis may allow people from other faiths to be witnesses.

One of the most important things you’ll need to do before picking your witness is to check with your rabbi or cantor to make sure what their requirements are.

In this time of the pandemic, with many weddings being downsized, the role of a witness is an even greater honor than usual. That also means it’s more difficult to pick your witnesses. No pressure!

Smaller weddings mean more emphasis on family guests, so your choice of witnesses is a great opportunity to bring in friends and loved ones who aren’t related to you. Many couples pick someone that they know they can count on for absolutely anything. It’s also common to pick a witness who is in a wonderful marriage, as an example of what yours will be. During the ceremony, different sets of witnesses are sometimes in order to spread the honor among more friends.

In any case, it’s worth taking some time to discuss witnesses with your spouse-to-be, so that you make a thoughtful pick, someone you admire and who will be honored by providing the finishing touches to your ketubah.

Next to the wedded couple, witnesses may be the most important people at a wedding. They seal the marriage, and in doing so they support the marriage much like how the married couple support each other. The role of witnesses in Jewish weddings is quite the honor, and it’s yours to bestow!

We hope the witnesses you choose embellish the beauty of your wedding, and that their signatures make your ketubah that much more priceless and cherishable. Above all, we hope your witnesses can continue to inspire and support you as your marriage grows. 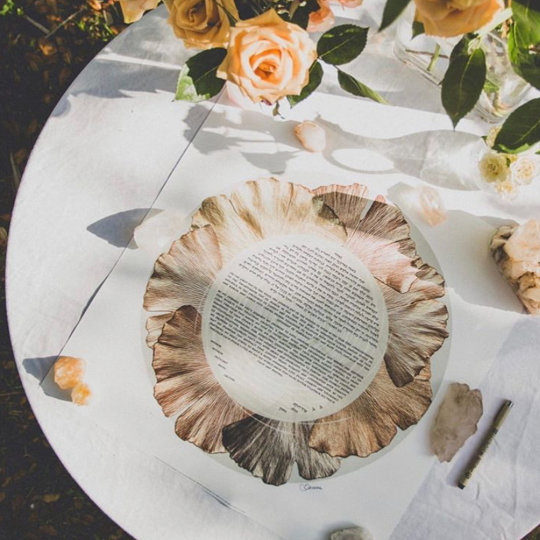 Ordering Your Ketubah: A Simplified Process Creativity and the Downsized Jewish Wedding